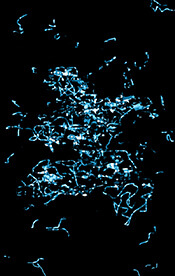 During the first years of my compositional research, my goal was to recreate in my music the flux of the psychic energy at work in the unconscious and its underlying structure. At the time, I was going through an analytical process which favours access to this unconscious activity, and my readings in the field of psychoanalysis were helping me in the effort to elaborate a musical thinking likely to account for this psychic complexity, which only appears through unintentional acts and words, or in fantasies and dreams. A whole structural and formal model for a potential music was emerging then, since only the plasticity of the sound world seemed to be able to suggest this mobility and instability, which endlessly alter the configurations of the components of the unconscious.

A first approach consisted of establishing a structural link between the minimal units acting on the microscopic level of my writing, and the signifiers, as defined by Jacques Lacan. These combine and move, forming chains and ramifications at the heart of a dense network, borrowing from daily life and from the past (a word, a gesture, a body fragment), coupling times and heterogeneous objects, and reveal, in ephemeral conglomerates, what is hidden or remains to be decoded.

On the musical level, I imagined small sound mobiles, dilated or contracted by processes playing on durations, pitches or intervals. Through rocking movements or torsions around an axis, they ensure the passage from one stratum to another, thus gradually and fleetingly setting into vibration the different zones of a potentially infinite field of sound particles (or signifiers). Within such a fabric, such an intertwining of lines and articulations of dots, time is also multiple, traversed with cross-hatchings and breaches, experienced as if it were split, if the perception of objects is favoured; or it is a pure process, a pure path, if one allows oneself to be carried away by the speed of the influx, which makes all identification difficult.
From these small oscillating sound entities which cross sound space - and time - under the action of attractive or repulsive forces, from these intensive trajectories, from this musical flux conceived as "pulsounds", from these "musical desiring machines" (to evoke another approach to the unconscious proposed by Gilles Deleuze and Félix Guattari), that I developed in Order of release, border of relish (2002-04), a series of three pieces for four instruments, other ramifications have emerged, leading to other paths to be explored.
These constellations of signifiers, these polarities, these montages which psychoanalysis describes, foreshadow each individual’s invisible psychic architecture and the abstraction of this other body (the imaginary body) whose outlines depend more on the trace of the sensations which were imprinted in it than on its anatomical boundaries.

From this thought about the body - the bodies - one of the paths to engage concerned the writing of a sound body which would reflect this unconscious image of the body, and would attempt to unveil it, or which, favouring a work on the limits of the instrumental gesture or the sound object, would also endeavour to shape a moving body or one defying all classification.
Trying to investigate this psychic body, deriving models for musical processes from it, is to work on the possible dissonance between the real body (the musician’s one, involved in the performance, for example) and the libidinal body. It is to gamble on a constant paradox, which consists of developing constructions (objects or musical situations) in order to make the structure more perceptible, and at the same time of undoing them so that this same structure could rise to the surface, by making use of the sensorial field to give access to the imperceptible. Cinematic dimension, proliferation and polyfunctionality, changes of state and polymorphology of the musical components, are the insistent features of these abstract and fleeting sound cartographies, even though they are saturated and reach thresholds of extreme intensity.

But if one opts for an approach which takes into account the articulation of elements rather than their form or their identity, if the density of the varying distribution of dots and their migration induces a labile diagram of these endlessly proliferating links, a good many inroads across territories can be envisioned.

In the series of pieces Psyché-Cité/Transversales (2005-07) I became interested in the relationships which can be established between sound space and urban space, between the sound body, the psychic body and its technological and urban excrescence.
The structure of the urban space, with the complexity of its connections, can be considered as a fantasy construction, which is intended to compensate for the deficiencies of the body, a gigantic collective and artificial organism, a huge crossroads of trajectories which thus suggests the multiplicity of the associative chains of the unconscious.
But does this structure of objects and spaces influence the organization of the psychic structure or is it a projection thereof? Are Humankind’s material constructions only reproductions of the organizational laws of matter on a microscopic (particles, cells) or macroscopic level (more visible shapes)? Can the outside help us to apprehend the inside?
From this questioning came the idea of extending my writing to the quest for a kind of hybrid sound territory, halfway between organic and mechanical matter, where the boundaries between inside and outside would vanish, in which microscopic elements would cross categories (like the DNA transplants carried out by geneticists, which cause certain elements to cross over from one species to another).
What is at work is the impact that microscopic phenomena and behaviours can have on matter and forms.

Within this perspective, other fields of knowledge (genetics, psychophysiology, particle physics, nanosciences) have been added to psychoanalysis because they also explore these phenomena which present the specificity of a similar principle of linking minimal elements, generating an elasticity of matter, whether verbal, meaningful or chromosomal and cellular. One can thus put into perspective the chain of nucleotides which constitutes DNA and the chain of signifiers described by psychoanalysis. The neuronal network can evoke the subway network.
From these different scientific approaches which turn our conception of the world upside down, it becomes interesting to envisage musical matter as any matter, i.e. full of vibrations which can be imagined and transcribed as cerebral waves (a kind of "electromusicogram"), and made up of varying links (permutations, extensions, etc.) which form "sound molecules" and can undergo mutations (in Mutatis mutandis - 2008 -, the musical material allows errors of reduplication similar to genetic errors).

These structural patterns are therefore very rich in potentialities for the writing of a music articulated on the lines of unconscious processes (the psychoanalytical aspect), of a "musical genetics" (the physiological or neurophysiological aspect), of a "nanomusic" (reference to nanosciences, on the microbiological, microphysical or microchemical level), the sound field being considered only as one of the possibilities of the infinite field of matter.