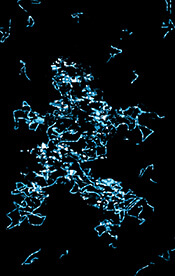 Clara Maïda is a French composer both based in Paris and Berlin.

She was a Guest Composer of the BERLINER KÜNSTLERPROGRAMM of the DAAD for one year (2007-08).

She received several  international composition awards such as a 1st Prize at KOMPOSITIONSPREIS DER LANDESHAUPTSTADT STUTTGART 2011 (DE), the BERLIN-RHEINSBERGER KOMPOSITIONSPREIS 2008 (DE), an Honorable Mention at EARPLAY DONALD AIRD COMPOSERS COMPETITION 2008 (US), an Honorary Mention at PRIX ARS ELECTRONICA 2007 (AT), a 2nd Prize at SALVATORE MARTIRANO MEMORIAL COMPOSITION AWARD 2003 (US), and two Finalist selections at MUSICA NOVA Competition (CZ, 2017 and 2008).

She also received several COMPOSITION GRANTS from the BUNDESREGIERUNG FÜR KULTUR UND MEDIEN 2022, the BERLIN SENAT 2015 and the AKADEMIE DER KÜNSTE Berlin 2006 (DE). And she was laureate of the HORS LES MURS PROGRAMME 2012 of the Paris FRENCH INSTITUTE.

She was a composer in residence in several electroacoustic studios (ELECTRONIC STUDIO of the TECHNISCHE UNIVERSITÄT and STUDIO FÜR ELEKTROAKUSTISCHE MUSIK of the AKADEMIE DER KÜNSTE in Berlin, ART ZOYD Valenciennes, CÉSARÉ Reims, GRM Paris and GMEM Marseille).

Her musical works have been broadcast on numerous radios in Germany, France, the United Kingdom, Spain, Switzerland, Mexico, Australia and South Africa.

Various articles have been published in music journals, reviews of psychoanalysis and literature in France and in Germany.

She was a Guest Professor of Composition at the ESCOLA SUPERIOR DE MÚSICA DE CATALUNYA (Barcelona, ES) in 2015.

She has been invited to present her interdisciplinary research at the intersection of music composition, structuralist psychoanalysis, Deleuze and Guattari's philosophy, and nanosciences during conferences, seminars, masterclasses and international musical and transdiciplinary colloquiums in various institutions in France, Germany, Spain, Italy, Belgium, Ireland, the United Kingdom, Australia and New York.