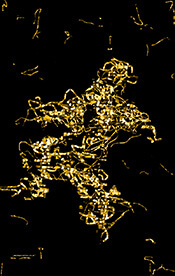 This 28-photograph selection from the series Diffract City endeavours to throw into light the diffractions of the shapes and colours noticed on the pavements of cities under rain (Paris, Place de la Nation, in this series).

The lights, the game of colours brightened up by the rain and artificial lighting at dusk recompose abstract, strange, often fascinating forms, and make an unrecognizable urban environment emerge, a kind of parallel city, another reality.