…who holds the strings…

1st part of www, a series for string quartet, and 2nd part of Order of release, border of relish, a tryptich for 4 instruments.

…who holds the strings… 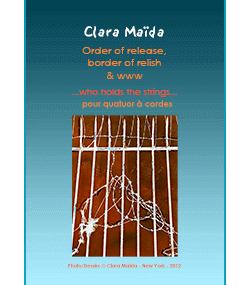 …who holds the strings… is the second part of the triptych for four instruments Order of release, border of relish. The three pieces use the same harmonic material generated by the spectral analysis of multiphonic sounds of wind instruments (four from the bass clarinet and three from the oboe) and of the low C of the cello played with a maximal pressure of the bow. Some sound objects and musical situations come back in the three pieces.

In this piece, no one holds the strings. The string quartet is conceived as a global entity, a kind of object which moves alone, driven by its own mechanics. The strings are tangled in a mobile and fragile architecture made of perpetually transforming microscopic elements, which never have any fixed location and whose articulation suffers constant alterations.
Tears appear, new links are tied then torn again.
Various forces such as attraction, repulsion, combination, phagocytosis, govern the objects, putting them face-to-face, and thus create an ever temporary morphology.

All the sound objects of the piece have an invariable specificity. They overturn around a pivot, from left to right or up and down.
This oscillating gesture around an axis also governs the harmonic distortions (chords in a mirror-like relationship with the original chord), the melodic structures (repetition of a few pitches around a pivot pitch), the melodic curves (motives which form an ascending-descending or descending-ascending curve around a horizontal axis), the registers (rocking between low and high zones of pitches), the dynamics (crescendo-decrescendo or the contrary), the rocking between two musical situations.
An antagonism between the musical objects or situations can appear. A situation, with its persistence, can drive away another one.

The articulation of very small and abstract objects, which are more principles of objects than objects (a simple gesture, the pivot around an axis, the rocking) raises the question of representation.
What can be perceptible when this representation is refused or impossible? What can be the variations of one same gesture, in which new perspectives can one make them appear? An envelope, a movement… Something runs along the sounds, at the border of what can be represented.
It is the insistence of the gesture that helps us to mark it out in a temporal course and attempts to draw the vague outlines of an invisible and inaudible real. 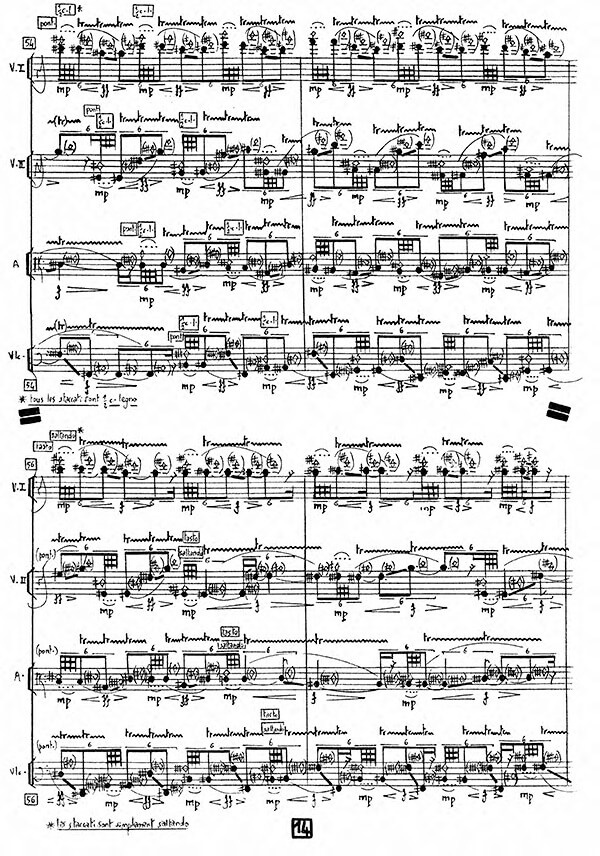