3rd part of Order of release, border of relish, a triptych for 4 instruments. 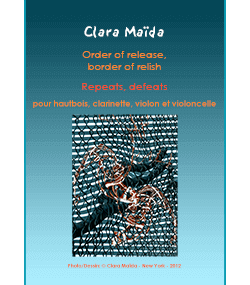 Repeats, defeats is the third part of the triptych for four instruments Order of release, border of relish. The three pieces use the same harmonic material generated by the spectral analysis of multiphonic sounds of wind instruments (four from the bass clarinet and three from the oboe) and of the low C of the cello played with a maximal pressure of the bow. Some sound objects and musical situations come back in the three pieces.

Each repetition produces a small difference, a small sliding, a shifting that inflects the form or the texture of the objects up to their disintegration. They lose their substance, their content. They become shadows of objects and remind of these dead and transparent skins of the insects after they got out of their shell. Things get undone.

In spite of the dissolution of the representations, a movement persists and draws dynamic paths that interlace and meet, pass again and insist always in the same place as if one was rubbing down a same surface until nothing more remains. All the objects, all the musical situations of the first parts of the piece lead to a two-pitch cell interrupted by a silence, a sort of gasping breath, a breaking point where the objects are deprived of their matter, depleted up to noise or a murmur, up to silence. Matter has disintegrated.

Something is worn out in this piece.
Everything happens as if the language was becoming inarticulate and was making way to a scream, a hoarse sound, which would remind of jammed mechanics.

Repeats, defeats… The mechanism is short of breath. Only the "beat" remains, this slight fluttering which indicates that an organism is still alive.