1st part of Lostery 3 (3rd part of Lostery, a triptych of sound and visual installations and of works for contrabass clarinet and electronics).
A multimedia work.
4th part of in ipso tempore (a series of electroacoustic works).

Portfolio of the project
of visual installation
(pdf) 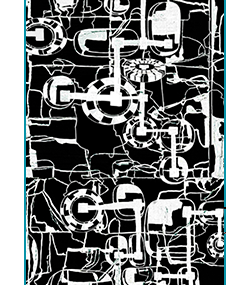 Ipso primero for electronics lies at the intersection of two series of pieces, Lostery and in ipso tempore.
If the piece is presented as part of the series Lostery, it can be either separately played in a concert or played on a loop in the place in which the installation is shown. If the piece is presented in the context of the series in ipso tempore, it is played in a concert and can be associated to the pieces Ipso facto and Ipso Lotto for electronics.

The title Lostery condenses the words "lost" and "Lottery". Thus it expresses a rather pessimistic state of mind in which what has been brought into play leads most of the time to failure. It accounts for the successive economic, social and political crises that we have been experiencing over many years and for the increasing inequality between people.

The series Lostery questions two structural parameters which have a significant impact on our lives - on the one hand, the gearwheels of the societal machine in which we are immersed and which mostly conditions our destinies, and on the other hand, the notion of chance which plays a part in the path that we will or will not be able to follow. It divides individuals on the side of the more or less lucky or unlucky according to the socio-political and economic system of the country in which they were born, or to the family context they were brought up in (more or less favoured and equalitarian), their life in a country at peace or at war, the greater or lesser freedom of choice given to them, etc.

The term "primero" refers to a card game which is the ancestor of poker game. From the Latin locution "ipso facto", which means "by the very fact", "therefore, automatically", I coined the title Ipso primero in the same way as the title of the previous piece of the series, Ipso Lotto. Ipso primero might mean "by the very poker", or "by the very poker hand", by what one can gamble, and win or lose.

The piece uses the sound recording of the machines and objects present in game rooms or casinos and to the actions during poker game (the shuffling and cutting of cards, the sound of the chips on the tables, the dice shaken in the cups, slot machines in the background, balls rebounding on a roulette, etc.). The sound material and various morphologies re-use elements from Ipso Lotto, evoking once more the mechanical dimension of the machines as well as the repetitive gestures of the players. The sounds of the handling of cards and chips are added to the splinters, the jolts, the rolls, the rebounds or ricochets of the previous piece.
The sound conception plays on two levels, a poetization of the concrete sounds of these various objects present in game rooms, and a temporality which oscillates between a sound agitation evoking the feverishness felt by the players and the stretching of some musical events, a suspension, a state of expectancy.

The visual installation which accompanies the musical work includes visual elements and objects related to the games of chance (the lottery for Ipso Lotto, poker for Ipso primero). The huge abstract animated machinery of Ipso Lotto that projected onto a screen its graphical black motifs on a white background is this time reversed, proposing a visual counterpoint of white motifs on a black background to the sound mechanics. This choice of black and white, regardless of their dominance over each other, recalls that the game is binary. We win ("jackpot") or we lose ("jack shit", "nothing" in slang). It is double or quits, all or nothing.
The dense interlocking of the graphical motifs evokes the complex gearwheels of a world beyond any control and gives the feeling that the individuals are trapped in an obscure mechanism which completely randomly casts the dice. Two poker cases, with dice and black and white poker chips, are placed from either side of built objects (discs and cards with various dimensions, small cubes), present the same abstract black and white graphics as that of the machinery and create a connection between the projected image and the objects related to poker (chips, dice and playing cards). They seem to be debris rejected by a system with an inflexible mechanics.

What is chance? How far can we really decide on our life? The accumulation of the sound and visual connections in Lostery induces the perception of a kinetic, bruitist and machinic whole. Which place is it possible to find in such a system or, inversely, how is it possible to step aside and to get out of it? 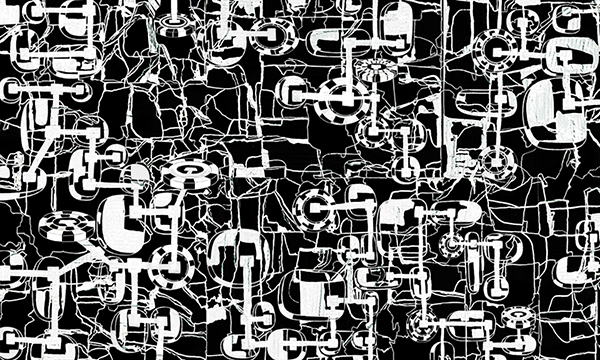