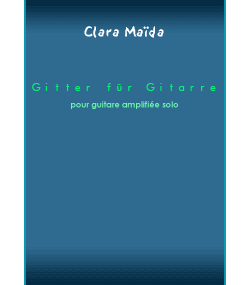 Gitter für Gitarre was composed while the writing of Shel(l)ter, a series of four pieces for ensemble and  electronics, was in progress. This series was referring to one of the atomic shelters in Berlin.
I have therefore used the same musical material and the same kind of formal structure as in the second part of the series, Shel(l)ter - unter . . . ( ) . . . Gitter.

The German word "Gitter" ("a metal gate", "grille" in French) calls to mind the enclosed atmosphere, the imprisonment that one can feel in such a place, locked up, opaque and isolated from the outside world. What was originally designed to be a shelter becomes also a prison. Any movement in space runs into walls and in a way, becomes framed, "criss-crossed" within the four impassable walls which mark out the surface of the bunker.
Moreover, the French word "grille" both designates a metal gate and a grid, thus consisting of the repetition of vertical and horizontal intersecting lines, the juxtaposition of small squares (four angles). It is therefore an object whose function but also structure is made up of its own imprisonment.

The piece is thus delimited by four boundary markers, four small evolving structures, underlined by a way of playing and a timbre different from what is heard in the other sequences (a scraping of a spoon on the lowest string). Each time they appear, these structures present a very restrictive rhythmical material which undergoes a gradual liquidation up to the arrival onto a repeated pitch, pointing out that any progress is doomed to failure.

Throughout the whole piece (except those sequences played with a spoon), the use of the Bottle Neck to modulate pitches as well as the scordatura of the instrument convey a musical material which endlessly overturns and does not find its balance any more. The systematization of this way of playing indicates a mental state gradually overwhelmed by the absence of any perspective. The situation of confinement generates a psychic imprisonment. The disappearance of the opening towards an elsewhere gives rise to the manifestation of inner micromovements which would attempt to compensate for the impossibility of a bigger mobility.

The piece thus ends with this repetition of a minimal ascending movement, a small mechanical formula which is ticking over and has abandoned all effort of release. This apparent resignation, however, is not devoid of a touch of humour, the best defence against despair. 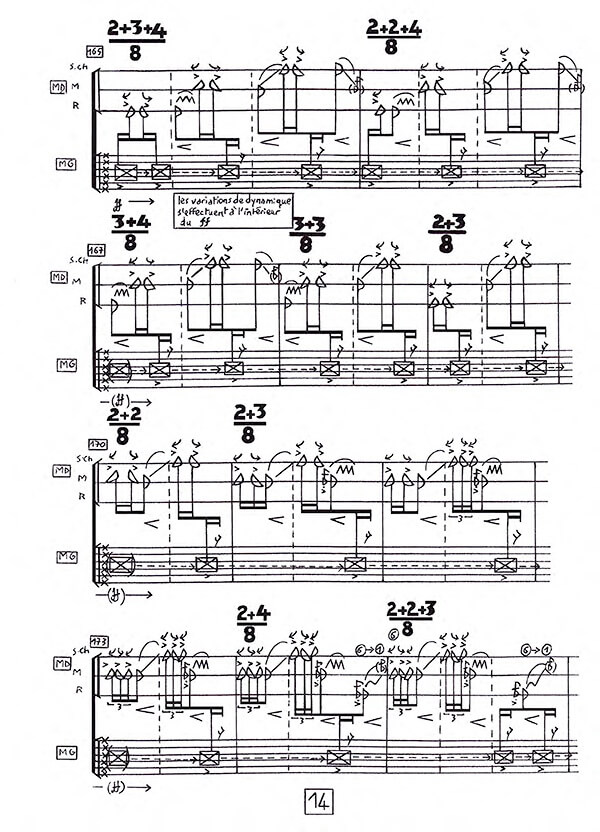