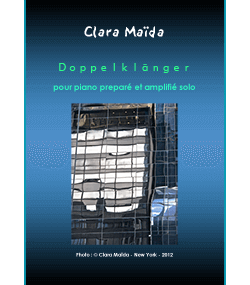 The title Doppelklänger is derived from the German word "Doppelgänger".
"Doppelgänger" means "double" and is used in the paranormal field to indicate the ghostly double of a living person, or a phenomenon of bilocation (another self, visible in another point of space).
It is a theme which can be in keeping with the literary field (Jean-Paul, Guy de Maupassant, etc.) as well as the psychiatric one within which one can choose to interpret this phenomenon as a mental disorder of dissociation of the personality.

During my stay in Berlin, as I was experimenting for the first time living abroad over a long period, with the eventual idea to emigrate to this city, I related that theme of "Doppelgänger", and that experience of body split or psychic dissociation, to the sensation of exile lived, at times, in a very intensive and painful way. The resulting loss of landmarks, and the impression of wavering were generating a kind of bilocation, which means that one part of the ego felt in Berlin, when the other part was experienced as if it had remained in Paris.
The piece attempts to retrace that experience and the act of writing was, in this precise context, felt as a liberating act with the possibility to get rid of this psycho-affective uneasiness and to recover a psychic unity and the sensation of a more defined place, or on the contrary to accept an undefined place.

This wrench or migration process, which took nine months (the duration of the period which precedes childbirth...), gives its architecture to the piece which is articulated around nine small structures, nine small constructions clearly perceptible, except the last one which is more elliptic since the process is accomplished. Their organization is going to be gradually shaken, in spite of their persistence to return, with various alterations (the melodic and harmonic migration of the frame, a gradual liquidation of the material, etc.).

These structures work on a twofold level. The first level enunciates a frame made of a few pitches whose contours are recurrent and recognizable in spite of the distortions of the material. It accounts for the resistance of the landmarks and for the refusal to give up the behavioural schemes used until then. The second level develops a gravitation of minimal units around these landmarks. It is the driving force of a possible mutation, either through the gradual disappearance of these units, or through their proliferation. A kind of sound duality appears, torn between the repetition of quasi conjuratory formulae and the mobility of "breakaways" of dots and lines inducing an extension of the sound territory.
This structure which was already double-sided reveals, at the end of its mutation path, another double structure made of small three-sound motifs played on the strings of the piano which emerge in a fleeting and fragmentary way while some short chromatic curves begin to appear. This kind of hidden structure, gradually unveiled, opens to another dimension, induces a rocking towards another sound scene underlined by the timbre generated by playing on the strings of the instrument.

A double sound scene and source, a double structure, a double timbre. Doppelklänger is not simply the presence of a double sound, but the process, the trajectories of splitting, bilocation, deterritorialization of sound in several spaces (musical as well as material) and the attempt to keep a coherence despite these separated entities. 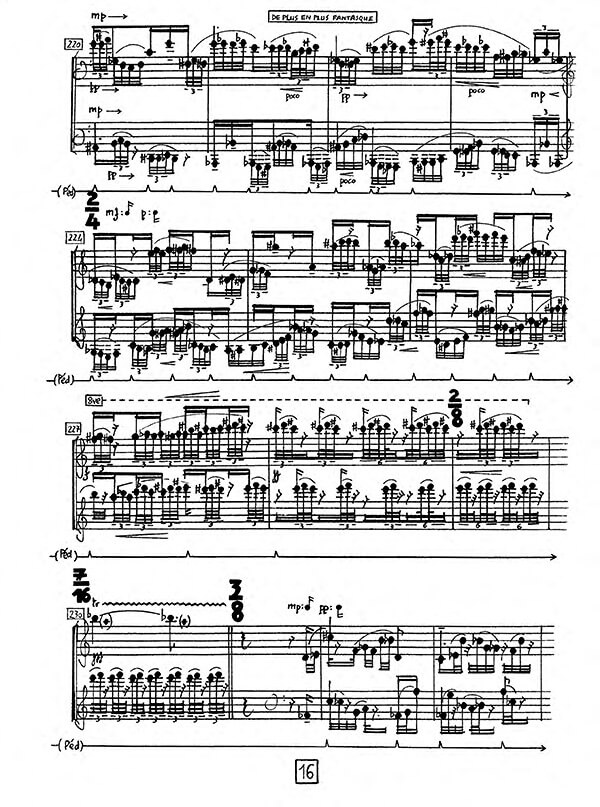