Photos of the premiere 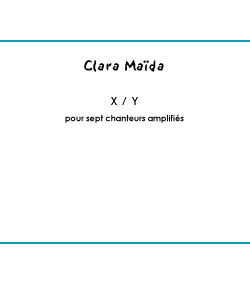 The title X/Y evokes X and Y chromosomes which mark out the sexual identity in the human genotype.

The initial material of the piece is developed from a sound conversion of X and Y chromosomes’ data. Sound frequencies are determined from the lengths of various regions of the DNA molecule and constitute therefore a specific "spectrum" for each chromosome the two generator aggregates of the piece are derived from. Besides, the order of succession and the number of repetitions of the chemical bases (a, c, g and t) in the genetic sequence of the chromosomes generate rhythmical series.

The structure of these two chromosomes and the different steps of meiosis (the sexual cell division) influence the musical form and the stages of instrumentation.
During the very dynamic development of meiosis, masculine and feminine chromosomes move very precisely in the cell. They migrate between the centre, where the recombination of their material takes place, and the periphery.
According to this biological model, the first part of the piece is articulated around two entities - vocal and percussive - which do not stop exchanging their instrumentation. When the central trio is percussive, the peripheral quartet is vocal and vice versa. Thus these two timbres, like chromosomes during meiosis, can be heard travelling between the centre and the periphery. Musical elements also move from one performer to the other, forming diagonals between front and backstage, between left and right.

The stage disposal of the singers is built according to two criteria. On the one hand, this graphically refers to X and Y. Two spaces fit together. Four peripheral points correspond to X and are marked by the two highest feminine voices and the two lowest masculine voices. Three central points forming the Y are drawn by the mezzo-soprano, the countertenor and the tenor with a more concentrated register. On the other hand, the feminine space is located on the left of the stage, the masculine space on its right. In the centre, the countertenor takes the place of a "hermaphrodite" pole, a meeting or merging point of both sexes, where diagonals converge in the X squared space and the Y triangular space. Colours worn by the singers underline the polarization of these still active social patterns, the women being in black (Yin) and the men in white (Yang). The countertenor, in black and white, assembles these oppositions in one single entity. He also indicates that this bipolarity of tradition is not so clear-cut and that the parts are not so stuck, that a complementary of functions lies inside each of us.

The piece questions the identity of man and woman, but also love and desire which, as psychoanalysis has shown it, goes widely beyond the biological field. The imaginary dimension is fundamental. The love quest merges a search for the same and the other. The agitation of the musical situations accounts for the disruption and the emotional fragility into which it throws us. One can find or lose oneself in this game of mirror with multiple diffractions. For x and y are also the unknown factors of mathematical equations. What do we perceive of this other at the same time similar and different? Reality and Imaginary collide inasmuch as the affect is intense. Is it possible to know oneself and the other beyond this distorting veil? This voice of love, emitted or heard, emerges from our innermost, from unexplored psychic zones. That is why it is filtered through various resonators throughout the piece. 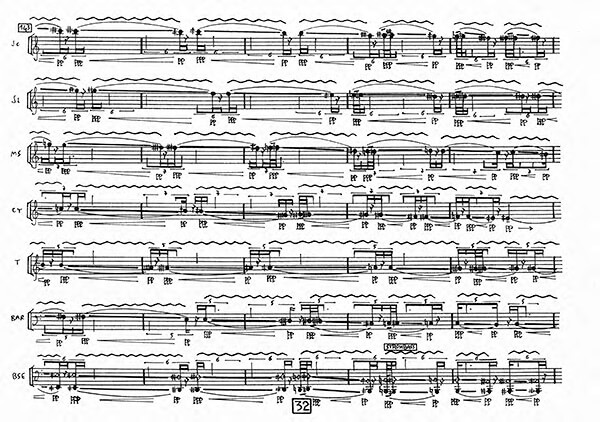