3rd and 4th parts of Shel(l)ter, a series for ensemble and electronics. 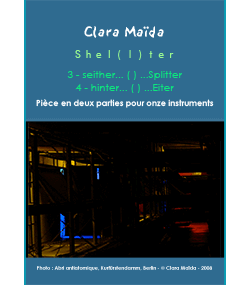 Shel(l)ter is a series of four pieces which refers to a very specific space, one of the atomic shelters in Berlin.

The reduplication of the letter "l" condenses in the title the words "shell" and "shelter", which both evoke the attempt to protect the body against any aggression. But "shell" means at the same time the protection of certain animals (molluscs, for instance) and a weapon. So the double polarization of this word underlines the absurdity, constant in Humankind, which consists in constructing at the same time objects of destruction and objects that would protect against this destruction.

Placed in brackets, this reduplication of the "l" indicates both a stop and a junction or the transformation of a repeated element, a rupture, a mutation of the structure of a given material or situation, as well as a separation or imprisonment, the self-destructive perverse effect which all protection is also likely to induce when it leads to isolation.

In Shel(lter, one can talk of "nanomusic" (in reference to nanosciences which observe and manipulate objects on the atomic scale), since this mobility and this transformation of the properties of the musical fabric result from microprocesses that act on the sound particles, generate variations of masses, forms and paths, but also resistances and persistences. The atomic thus reminds us that everything is particle, everything is atom, the sound field being considered only as one of the possibilities of the infinite field of matter.

This last piece of the series is made up of two parts. It evokes the pulverization of objects and bodies which follow the explosion of an atomic bomb and the disruptions that radioactive emissions operate on organic matter.
In the first part, whose sub-title is seither... ( ) ...Splitter - which means in German "since then... ( ) ... splinter" - the musical elements which had been used in the previous works are torn to pieces. A world is bursting and jagged fragments fly across sound space in all directions.
Sound objects have lost all cohesion, all polarity. Their scraps collide and suffer numerous diffractions towards a multiplicity of trajectories. One is in a situation of crash and disorder. A falling movement regularly comes back and mimics at the same time the radioactive dust fallout and the collapse of what used to be.

I had in mind the dynamic image of the shock wave and the huge blast, the fireball which is formed, the mushroom cloud which spreads out in waves, quickly ascending with a very important emission of thermal energy and radiations before it releases its rain of particles.

The second part hinter... ( ) ...Eiter - which means in German "behind... ( ) ... pus" - depicts the deterioration of matter, the affection of flesh, scars and blisters, the decomposition and the putrefaction of bodies. It is the world of deliquescence which induces the mutation or the destruction of shapes.

In some sequences in which the musical material has rarefied, wind instruments emerge at the heart of grief (mainly the oboe, clarinet, trumpet and horn). They produce multiphonic sounds close to a rattle, a moan, kinds of evidences of the survivors’ suffering (paying tribute to the victims of Hiroshima and Nagasaki).

These voices express at the same time the psychic trauma and the physical injuries. Their monstrous connotation refers to organic ravages as well as human barbarity.
The shapeless sounds of percussions (the skins rubbed with a super ball stick) or the final texture which superimposes elastic glissandi of the strings calls us to mind that, beyond the immediate lesions of the organism caused by the explosion and the irradiation, the latter is likely to imprint invisible and extremely deep modifications in the cellular tissue. These mutagenic effects will occur in defects affecting the descendants. 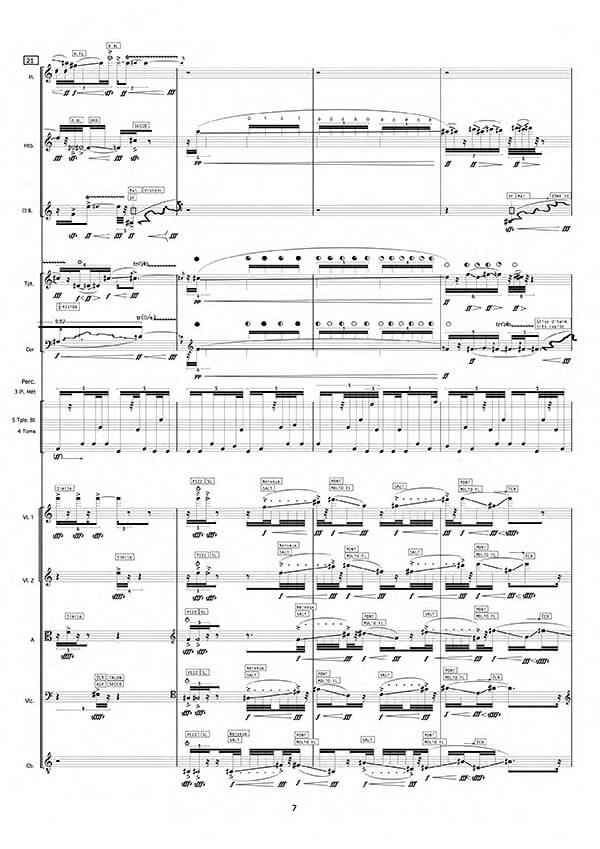