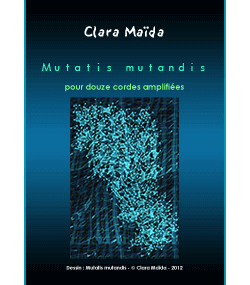 The title Mutatis mutandis is a Latin expression which literally means: "what has to be changed being changed". One can give a more up-to-date translation with: "Once the necessary changes have been made" and it indicates that one can make a fundamental connection between two situations after having operated some modifications concerning the details.
I opted for a kind of semantic shift, also interpreting this expression in the following way: "what has to be changed being changed, which new situation can be generated by these changes?".

The French word "mutation" being derived from this Latin word, I chose to make the sound material suffer the kind of different mutations that one can meet on the genetic level.
A mutation is an irreversible modification of the genetic and hereditary information. It can be caused by an error of copy of the genetic material during the cellular division or by exposure to mutagenic agents (radiations, virus, etc.).

The whole piece is based on a mutation process of the musical objects and situations. Some sound elements are duplicated, but their duplication is not completely identical. These modifications appear at a minimal level (a quasi "cellular" dimension of the sound). These "errors" or these microscopic shifts (which operate on the micro-intervals or micro-durations level) thus induce a migration of the duplicated sound elements and a plasticity of the global musical matter, for the addition of tiny, but numerous, disruptions reflects on the formal development.

Though different situations and heterogeneous materials are juxtaposed, such as the sequences of a cinematographic editing in parallel, the unity of this sound organism persists, since which is important are not the constituents of the different materials and situations, but the way they are crossed and affected by this force of change, this structural instability, this mutant and mobile proliferation of the material.

This mutation-migration of the sound material is not only made on the musical level itself (in the field of the pitches or on the durations level, for example) but also on the space level. The elements move from one instrument to the other, step by step or through stereophonic rebounds, from one place of the stage to another. Their moving duplication is put in the frame of a very rigorous space writing and contributes to the sensation of an endlessly diffracted musical matter, from moment to moment, from one point to the other in the stage space. 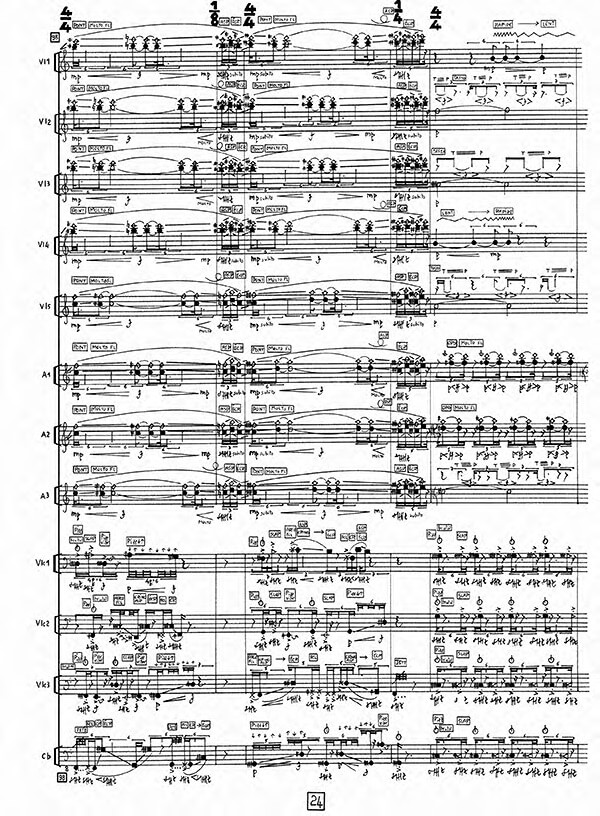