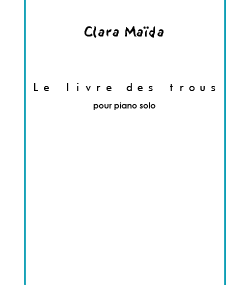 The title of the piece refers to some drawing books realized by the painter Miquel Barceló in Gao, a series of gouaches in which he made use of holes made by termites in the paper.

From a harmonic material derived from the spectrum of a Chinese tam-tam, I elaborated a reticular structure (made of the superimposition of different variations of a microintervallic scale coming from the high frequencies of the spectrum) following a downward movement.

Each repetition introduces temporal micro-gaps and a gradual division of the texture until silence is reached.

Then I tore up tails of the score to make holes.
The shreds on which fragments of this structure were written have generated sound objects, "objects-waste" used again in the whole piece.

Near these objects, other objects coexist, small structures, kinds of miniature reminders of the reticular structure, small and unstable mobiles with internal quivering, that fall down or rise up, "objects-fans" (a superimposition of descending and ascending variations of this scale), compact splinters resulting from an abrupt torsion, "objects-chords", a fleeting synthesis of different frequencies of the spectrum, that have been able to emerge at the end of the processes imprinted on the objects.

All these objects are gradually torn, fissured and their structure can move from the reticle to the line, from the line to the dot, from the dot to the aggregate.
All these processes, rich in mutual connections and in meeting points, have this function to make a gap, an opening in matter.

What can be read in the hole? What does it reveal to us? Does it have a meaning, an existence, or is it only made of what was surrounding it (hence the necessity to destroy what borders it in order to look for what will remain of it)? Is this relentless work of drilling which matter resists an attempt to expose the hole, to restore its place or, on the contrary, to disguise it? 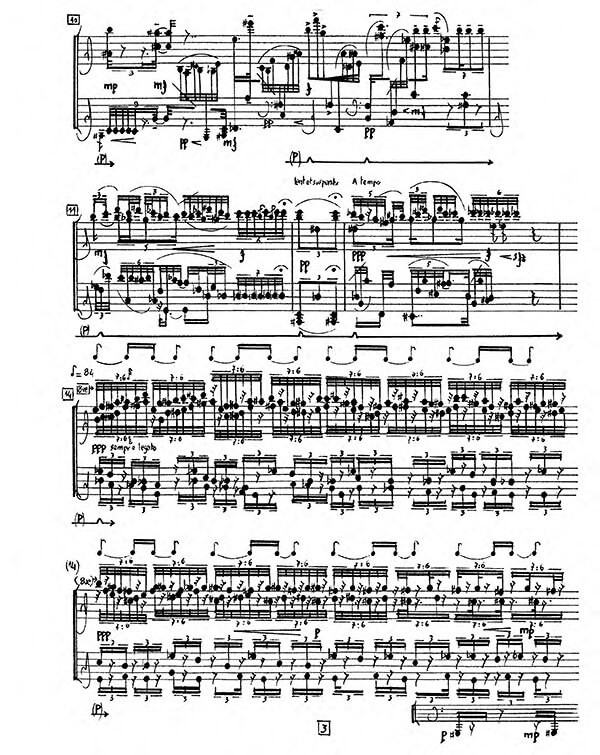